Home › 2013 › No pope selected after first vote at Sistine Chapel

No pope selected after first vote at Sistine Chapel

OTHER BLOGS I DID:

VATICAN CITY (Updated) — Black smoke emerged from Sistine Chapel chimney around 2:40 a.m. Wednesday (Philippine time), two hours after the cardinals from around the world locked themselves inside the chapel to choose a new pope.

Black smoke signals that the cardinals have failed to elect a pope on their first try. At least 77 votes are needed for a cardinal to become pope.

Outside, thousands of people braved cold night rain and packed St. Peter’s Square, eyes fixed on the narrow chimney poking out of the Sistine Chapel roof. Among them are Filipinos who brought with them the Philippine flag, as they prayed for Manila Archbishop Luis Antonio Cardinal Tagle, one of the strong contenders, to be elected.

The cardinals held the first day of the conclave Tuesday deeply divided over the problems of the church and who best among them could fix them following the stunning resignation of Pope Benedict XVI. The Vatican made clear it didn’t expect a winner on the first ballot.

The cardinals now return to the Vatican’s Santa Marta hotel for the night. They return to the Apostolic Palace for Mass Wednesday morning and a new round of voting. View schedule of voting

The conclave started around 11:30 p.m. Tuesday (Philippine time) after the 115 scarlet-robed men entered the Sistine Chapel to elect the new leader for the world’s 1.2 billion Catholics.

Led by prelates holding a crucifix and candles, the cardinals chanted the Litany of Saints, the hypnotic Gregorian chant imploring the intercession of the saints, as they filed into the chapel and took their oath of secrecy.

With a dramatic closing of the thick double doors and the exhortation “Extra omnes” or “all out,” the ritual-filled conclave began beneath Michelangelo’s frescoed “Creation” and before his “Last Judgment” — potent images for the task at hand. 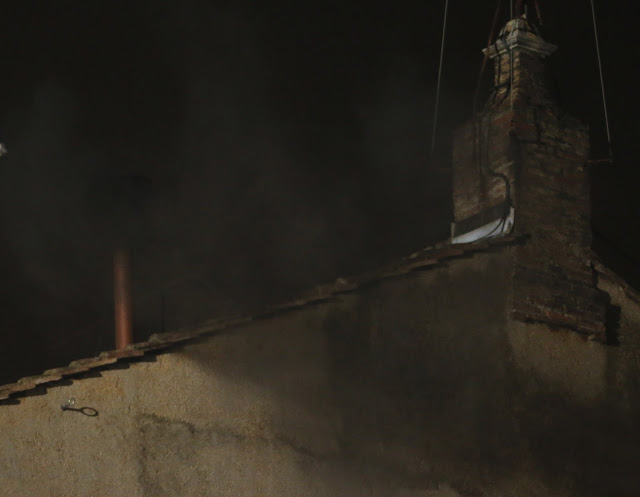 Photo by The Associated Press

The buzz swirled around Cardinal Angelo Scola, an Italian seen as favored by cardinals hoping to shake up the powerful Vatican bureaucracy, and Brazilian Cardinal Odilo Scherer, a favorite of Vatican-based insiders intent on preserving the status quo.

Other names included Canadian Cardinal Marc Ouellet, who heads the Vatican’s powerful office for bishops, and US Cardinal Timothy Dolan, the exuberant archbishop of New York.

In a final appeal before the conclave began, the dean of the College of Cardinals, retired Cardinal Angelo Sodano, appealed for unity within the church, urging the cardinal electors to put their differences aside for the good of the church.

“Each of us is therefore called to cooperate with the Successor of Peter, the visible foundation of such an ecclesial unity,” Sodano said.

He said the job of pope is to be merciful, charitable and “tirelessly promote justice and peace.”

He was interrupted by applause from the pews — not so much from the cardinals — when he referred to the “beloved and venerated” Benedict XVI and his “brilliant” pontificate.

Sitting in the front row was Benedict’s longtime aide, Archbishop Georg Gaenswein, who reported that Benedict was watching the proceedings from the papal residence in Castel Gandolfo, according to a Vatican spokesman the Rev. Thomas Rosica.

For over a week, the cardinals have met behind closed doors to try to figure out who among them has the stuff to be pope and what his priorities should be. But they ended the debate on Monday with questions still unanswered, and many cardinals predicting a drawn-out election that will further expose the church’s divisions. The conclave proceeds in silence, with no debate.

During the discussions, Vatican-based cardinals defended their administration against complaints that they have been indifferent to the needs of cardinals in the field.

At one point on Monday, the Brazilian head of one Vatican office reportedly drew applause for challenging the Vatican No. 2, who has been blamed for most of the bureaucracy’s administrative failings.

“Let us pray for the cardinals who are to elect the Roman pontiff,” read one of the prayers during the Mass. “May the Lord fill them with his Holy Spirit with understanding and good counsel, wisdom and discernment.” Leave your messages and prayers

A few hundred people braved thunderstorms and pouring rain to watch the Mass on giant TV screens in St. Peter’s Square. A handful knelt in prayer, eyes clenched and hands clasped. They stayed on through the rain, watching the narrow chimney atop the chapel for the first puffs of smoke which signal whether a pope has been elected or not.

In his final radio address before being sequestered, Dolan on Tuesday said a certain calm had taken hold over him, as if “this gentle Roman rain is a sign of the grace of the Holy Spirit coming upon us.”

He said he at least felt more settled about the task at hand. “And there’s a sense of resignation and conformity with God’s plan. It’s magnificent,” he said during his regular radio show on SiriusXM’s Catholic Channel.

Some of the faithful outside alluded to the huge challenge facing the next pontiff.

“It’s a moment of crisis for the church, so we have to show support of the new pope,” said Veronica Herrera, a real estate agent from Mexico who traveled to Rome for the conclave with her husband and daughter.

Yet the mood was not entirely somber.

A group of women who say they are priests launched pink smoke from a balcony overlooking the square to demand female ordination — a play on the famous smoke signals that will tell the world whether a pope has been elected. Two topless activists from Femen were dragged away from the edge of St. Peter’s Square by police as she protested the Vatican’s opposition to gay marriage.

And in a bizarre twist, basketball star Dennis Rodman promised to be in St. Peter’s Square on Wednesday in a makeshift popemobile as he campaigns for Cardinal Peter Turkson of Ghana to become the church’s first black pope.

None of the cardinals will see it, since they will be sequestered inside the Vatican walls. They are allowed to travel only from the Vatican hotel through the gardens to the Sistine Chapel and back until they have elected a pope. No telephones, no newspapers, no television, no tweeting.

While few people expect a pontiff to be elected on the first ballot, the Vatican was ready: In the Room of Tears off the Sistine Chapel, three sizes of white cassocks hung from a clothes rack. Underneath, seven white shoe boxes were piled, presumably containing the various sizes of the red leather shoes that popes traditionally wear. The room gets its name from the weight of the job thrust upon the new pontiff.

The papal tailor Gammarelli delivered the clothes on Monday to ensure that the newly elected pope could change immediately into papal white as soon as he accepts the election.

With the words “Habemus Papam” — or “We have a pope” — the pontiff then appears on the balcony of St. Peter’s Basilica to greet the crowd.

The conclave is taking place amid more upheaval and uncertainty than the church has seen in decades: There’s no front-runner, no indication how long voting will last and no sense that a single man has what it takes to be pope. (AP/Sunnex)