Sangomas have played a central role in many African cultures dating back many years; they were seen as custodians of their communities and were consulted by villagers to heal the sick, communicate with the gods on their behalf and to protect villages from harm. 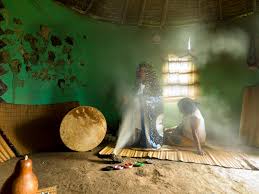 “We are Christians at home and we go to church like everyone else. We pray to God as the source of everything. I believe that being a sangoma is simply a gift that God has given me through my ancestors,” she says.

HERE’S WHAT GOD SAYS DIVINATION AND THE SUCH:

Many of those who believed now came and openly confessed their evil deeds. A number who had practiced sorcery brought their scrolls together and burned them publicly. When they calculated the value of the scrolls, the total came to fifty thousand drachmas. In this way the word of the Lord spread widely and grew in power (Acts 19:18-20).

Do not turn to mediums or seek out spiritists, for you will be defiled by them. I am the LORD your God (Leviticus 19:31).

I will set my face against the person who turns to mediums and spiritists to prostitute himself by following them, and I will cut him off from his people (Leviticus 20:6).

When men tell you to consult mediums and spiritists, who whisper and mutter, should not a people inquire of their God? Why consult the dead on behalf of the living? (Isaiah 8:19).

Do not practice divination or sorcery (Leviticus 19:26).

Therefore this is what the Sovereign LORD says: I am against your magic charms with which you ensnare people like birds and I will tear them from your arms; I will set free the people that you ensnare like birds (Ezekiel 13:20).

The idols speak deceit, diviners see visions that lie; they tell dreams that are false, they give comfort in vain. Therefore the people wander like sheep oppressed for lack of a shepherd (Zechariah 10:2).

“So I will come near to you for judgment. I will be quick to testify against sorcerers, adulterers and perjurers, against those who defraud laborers of their wages, who oppress the widows and the fatherless, and deprive aliens of justice, but do not fear me,” says the LORD Almighty (Malachi 3:5)

You shall not make for yourself an idol in the form of anything in heaven above or on the earth beneath or in the waters below. You shall not bow down to them or worship them; for I, the LORD your God, am a jealous God, punishing the children for the sin of the fathers to the third and fourth generation of those who hate me (Exodus 20:4-5).

Watch yourselves very carefully, so that you do not become corrupt and make for yourselves an idol, an image of any shape, whether formed like a man or a woman, or like any animal on earth or any bird that flies in the air, or like any creature that moves along the ground or any fish in the waters below (Deuteronomy 4:15-18).

MORE ARTICLES IN THIS SUBJECT:

Flies cause Sangoma to Disappear

SERIOUSLY=>  THESE ARE “TWEETS” OF THE SATANIC TRIAL

The clock is ticking on Microsoft Corp.’s (MSFT) Windows XP.

A year from today, Microsoft will end support for XP, meaning millions of PCs that still rely on the operating system will no longer receive monthly security patches and system updates–a critical juncture for owners of the 39% of PCs worldwide still relying on XP.