A NEW DANCE IN THE MIDDLE EAST AND THREE-UPDATE 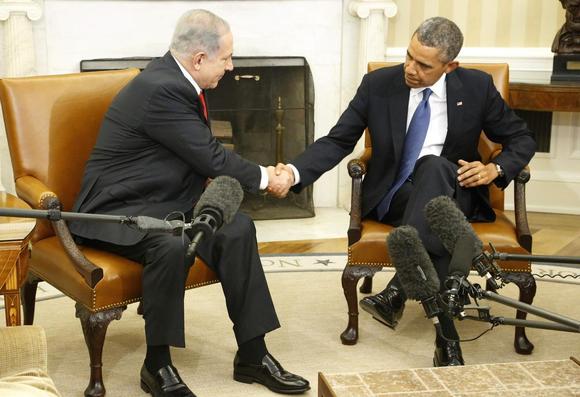 Israel’s Prime Minister Benjamin Netanyahu (L) shakes hands with U.S. President Barack Obama as they sit down to meet in the Oval Office of the White House in Washington March 3, 2014.

PRAYING TO GIVE OBAMA BENEFIT OF THE DOUBT:

Prime Minister Benjamin Netanyahu arrived in Washington, D. C. late Sunday night for meetings with Kerry, Biden and Obama today.   On Tuesday morning he is due to address the annual convention of the pro-Israel lobby AIPAC.  Before arriving, Prime Minister Benjamin Netanyahu, was quoted as sending a stern warning to the current administration in Washington:

” I’ll stand firm on the State of Israel’s crucial interests, first and foremost the security of the citizens of Israel,” he said. “In recent years, the State of Israel has been subject to pressures, but we have pushed through the storm and the regional tempest, and that’s how it will continue to be. “

The three dancing the “Middle East Tango” according to Prime Minister Benjamin Netanyahu is:     (Tango: www.haaretz.com)

Jeffrey Goldberg, did an hour long interview with Obama and did an excellent job!  One very interesting subject matter he approached was the issue of Sunni extremism or Shia extremism.  Addressing the question of extremism obama  chose not to pick either one to comment directly on.  Mr. Goldberg received this reply in a nutshell:  “I think change is always scary.”

We as American’s must stand with Israel!  When I say stand with her, I mean “beside” her and not behind her or ahead of her.  Israel has suffered much!  I am aware of the atrocities that many nation’s have suffered thru the centuries.  No war is pleasant or understandable even in the simplest of ways.  I’m not going to get into an argument with anyone over this position.  Why?  Because God’s Word says it all:

12 Now the Lord had said unto Abram, Get thee out of thy country, and from thy kindred, and from thy father’s house, unto a land that I will shew thee: 2 and I will make of thee a great nation, and I will bless thee, and make thy name great; and thou shalt be a blessing: 3 and I will bless them that bless thee, and curse him that curseth thee: and in thee shall all families of the earth be blessed. 4 So Abram departed, as the Lord had spoken unto him; and Lot went with him: and Abram was seventy and five years old when he departed out of Haran. 5 And Abram took Sarai his wife, and Lot his brother’s son, and all their substance that they had gathered, and the souls that they had gotten in Haran; and they went forth to go into the land of Canaan; and into the land of Canaan they came.  Amen

For further references of those opposing Israel:

Israel, Palestine, and the United Nations

A prayer for the State of Israel

6 Pray for the peace of Jerusalem: they shall prosper that love thee.