In a vigorously debated six hour public hearing in the Colorado House Health, Insurance and Environment Committee on Mar. 13, 2014, more than 70 Colorado citizens attended to testify in opposition to House Bill 1288 that would restrict access to the personal belief vaccine exemption in the state. By 3 to 1, they outnumbered individual citizens testifying in support of the bill.

Even though the Committee voted 9 to 2 in favor of passing the bill out of Committee, the vote did not come until after hours of powerful testimony by parents describing how their children suffered debilitating vaccine reactions that ended in chronic disability or death. Sadly, by 10 p.m. when the hearing ended, many parents opposing the bill had already left without being able to give their three-minute testimony because they were unable to stay into the night.

The hearing was extensively covered by the national and state media, including Associated Press, the Huffington Post and Denver affiliates of CBS and ABC.

Dr. Susan Lawson, a Colorado veterinarian and mother, whose child was awarded federal vaccine injury compensation after she suffered a severe reaction within eight days of an MMRV vaccination at age one, was quoted in an Associated Press article: “Parents have a constitutional right to parent their children,” said Susan Lawson, whose daughter suffered brain damage after contracting encephalitis from a routine vaccine when she was a year old. “I am not an uneducated woman.”

Read the rest of this article and make a comment here. 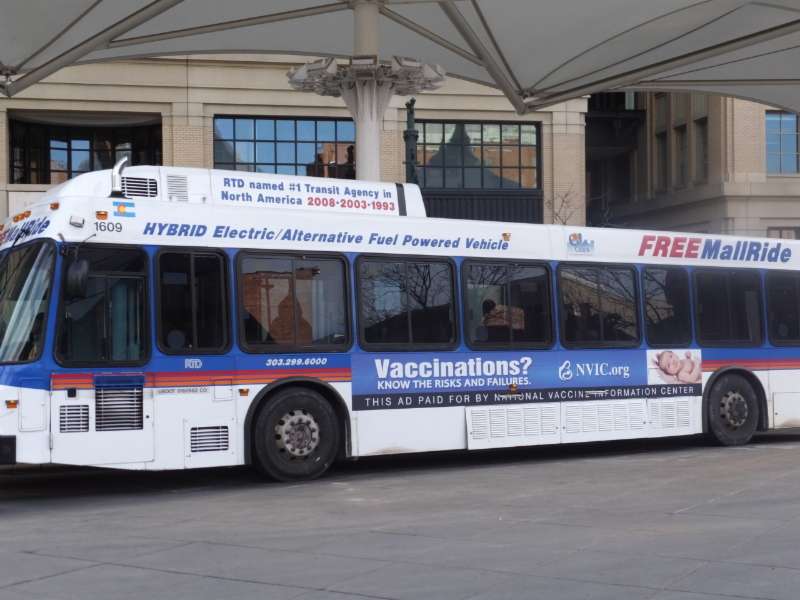 NVIC bus ads are continuing to run in Denver’s historic district and to the airport to promote the need for everyone to make fully educated decisions about vaccination.

Vaccine Freedom Wall: Have you or your children been threatened or forced to get a vaccination without your voluntary, informed consent? You can share your story with others by posting your experience on NVIC’s Vaccine Freedom Wall here.

NVIC in the News

What to Know About Flu Vaccines Before You Get One. Journalist June Fakkert interviews NVIC President Barbara Loe Fisher about new influenza vaccines that came on the market in 2013. She answers questions about flu shot ingredients; use of army worm and dog kidney cells for production; how the CDC estimates influenza deaths; FDA pregnancy category ratings for influenza vaccines and the need to read the manufacturer product information before making a decision about getting vaccinated.

Whooping Cough Death Reignites Vaccine Debate. Dawn Richardson is identified as the state advocacy director of the National Vaccine Information Center, an organization that “wants parents to be educated on the benefits and risks of vaccines.” She said, “Vaccines are pharmaceutical drugs that can help some people and hurt some people. Every single vaccine is able to cause a reaction that can cause injury or death in some children. Each child has a different immune system, they have a different family history, different genetics.”

“National Vaccine Information Center executive director Theresa Wrangham sees Colorado HB1288 as an attempt to pressure non-vaccinating parents into immunizing their children… Wrangham also challenges the idea that high vaccine exemption rates are leading to more cases of preventable diseases in Colorado. She blames the recent pertussis epidemic on a relatively ineffective vaccine, and points out that cases of some other diseases, like measles, are still rare. “If you’re seeing your incidence of disease stay stable and low… then why are we changing the law all of a sudden?” she asks.

Why Pro-Vaccine Messaging is Faltering.

NVIC co-founder and president, Barbara Loe Fisher, joined Robert Scott Bell to talk about how aggressive pro-vaccine messaging is backfiring on public health officials.  Barbara discusses the recent study in Pediatrics in which CDC officials admit the fear-based approach to promoting compliance with the federally recommended child vaccine schedule is not working when parents have done their own research and already made independent vaccine choices for their children. Pointing to the growing numbers of vaccines and reports of vaccine injuries, she said, “Today, everybody knows somebody who was healthy, got vaccinated and was never healthy again.”

Listen to a 14-minute excerpt of the radio interview on the Robert Scott Bell show posted on YouTube here or listen to the interview on Natural News Radio here Mar. 6, 2014.

A Shot in the Dark: CO Bill Will Make It Difficult to Exempt From Vaccines. According to NVIC executive director Theresa Wrangham, vaccine decisions for minor children should be left largely with parents. “This is a medical procedure that’s not without risk for injury and death. And what other medical procedures are parents being asked to get approval on for their personal beliefs when they educate themselves?” she asked.

A new report published in the journal Pediatrics reveals that well-funded campaigns created by public health officials to boost childhood vaccination rates are backfiring. “It is a big mistake for public health officials to assume that those resisting public health messaging about vaccines and diseases are ignorant, uneducated, ‘anti-science’ and that they lack social conscience,” said Barbara Loe Fisher, president of the National Vaccine Information Center.”The study found that vaccine safety critics resent the notion that parents who oppose vaccines need to have their views influenced or “corrected” – especially by government health officials. “That is counterproductive because most Americans are inclined to value freedom of thought and belief and resist being told what to think, believe or do,” Fisher said.  Michael Belkin, whose infant daughter died in 1998 after a hepatitis B shot said, “Basically, [parents] believe that the government is lying.”

A Colorado resident defends the personal belief exemption: “My guess is that the goal of this bill and the required ‘education’ is to coerce parents to vaccinate. There are many witnesses to this tactic already. Parents report being harassed, belittled and even dismissed as patients for refusing to be dictated to by their physician. Parents should have the right to raise their children without a ‘permission slip’ from a doctor who is under pressure to force vaccinations on the public.”
Read the entire letter in The Pueblo Chieftain Mar. 23, 2014.

Immunization Bill Vote Debated. A live TV debate on the Colorado NBC affiliate on House Bill 1288 to restrict personal belief vaccine exemptions featuring Robyn Charron, of Colorado Coalition for Vaccine Choice, and Sundari Kraft, of Voices for Vaccines/Vaccinate for Healthy Schools. Robyn said, “The purpose of this bill is to eventually remove the vaccine exemption entirely…The Colorado Coalition for Vaccine Choice is opposed to this bill because it infringes on our civil liberties. These are our children. It is our choice whether or not to vaccinate, to make all medical decisions for our children.“

“The bipartisan vote came after a hearing of more than six hours, a session that got increasingly passionate and heated as the evening wore on [and] drew a crowd comparable in size to those that showed up for recent hearings on testing and standards and on guns in schools. Vaccination has become controversial in recent years for some parents, who believe shots are triggers for a variety of illnesses…There were stark contrasts among the 45 witnesses who testified, with businesslike panels of doctors, childcare professionals, educators and parents supporting the bill. A much larger cast of opponents, many of whom identified themselves just as mothers or fathers, told sobering and emotional stories of their children’s severe reactions to shots, of autism, of disabilities and even of death…Most of the opponents arrived at the witness table with stacks of reports and other paperwork for the committee.”

Over the last two years, as many as 20 children in California have developed a sudden-onset polio-like illness with respiratory symptoms that has left them with permanent paralysis in one or more limbs and breathing difficulties. All of the children had received polio vaccinations. In several of the children, there was evidence of infection with enterovirus-68, which is from the same family as poliovirus. A pediatric neurologist said, “In the past decade, newly identified strains of enterovirus have been linked to polio-like outbreaks among children in Asia and Australia” and added that there is “the possibility of an emerging infectious polio-like syndrome in California.”

A self-administered flu vaccine patch is expected to enter clinical trials in spring 2014 and manufacturers are hoping it will increase the numbers of people willing to get vaccinated. In a pre-trial study of 100 volunteers in Atlanta, researchers using simulations of vaccination compared acceptability of the patch versus traditional needles and found that a significant percentage of people preferred the patch option. “Our dream is that each year there would be flu vaccine patches available in stores or sent by mail for people to self-administer,” said a Georgia Institute of Technology professor. “People could take them home and apply them to the whole family.”

In a global market already assessed at over 2.5 billion dollars, competition for the seasonal influenza vaccine market is intense. Drug companies are targeting markets for vaccinating “underserved” populations such as the elderly and very young children. A GlobalData report stated “despite a crowded field of competitors, there still remains the opportunity for new vaccines with novel routes of administration, innovative methods of production (i.e., cell culture- or recombinant-based), or enhanced efficacy in elderly patients to take a slice of a multi-billion dollar global market.” The U.S. is expected to retain 46 percent of the influenza vaccine market in 2022.

A Look at Vaccine Injury Compensation.

Between 2006 and 2012, 1.9 billion federally recommended vaccinations were given in the U.S. using vaccines licensed as “safe” by the CDC. In 1986, Congress passed a law that shielded vaccine manufacturers and doctors from vaccine injury lawsuits and created a “no-fault” federal vaccine injury compensation program (VICP) that was supposed to fully compensate the vaccine injured. A plaintiff attorney specializing in federal compensation claims says that vaccine-injury cases brought to the VCIP are hard to prove, can be costly and take a long time to settle. He added, “It’s very difficult to win the case and you’re up against a lot of resources that families don’t have.”