WATCHMAN ON THE WALL 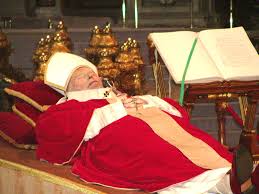 IS SATANISM BEHIND THE THEFT OF POPE JOHN PAUL II VIAL OF BLOOD?

In 2007 a string murders starting occurring and was linked to devil worship.  Italian churches were being desecrated by Satanists across the region. Clerics will be Working with Italian Police Officers’ sect squad sent by the Vatican.  Residing as liaise, Don Oreste Benzi, was brought in by the Vatican to work with the Italian Police on this case due to his expertise on Satanism and the occult.  The Vatican holds great concern over the youth and the influence and attraction that the occult has on them.  It is estimated that 8,000 Satanic sects are across the country with more than 600,000 members and the numbers are growing.  (Read article)

Author’s Snippet:
Thieves sold crucifix and the priceless relic, which contains a piece of gauze once soaked in the blood of the late Pope John Paul II- one of only three such relics in the world.
Author’s Note:
The forgiveness of sins is “only” through the shed blood of Jesus Christ!
Ephesians 1:7
In whom we have redemption through his blood, the forgiveness of sins, according to the riches of his grace;…
Pope John Paul II’s blood inspires Colombians (???)
SLIDESHOW

Parts of the relic of Pope John Paul II are displayed in Rome after being recovered by police on Friday.

By Philip Pullella, Reuters
More from Reuters on the recovery of blood vial….
NO WORDS FOR THIS (GRAPHIC AND OFFENSIVE)
gaga can’t sink any lower
Review
MOSCOW  GHOST CAR CAUSES ACCIDENT?